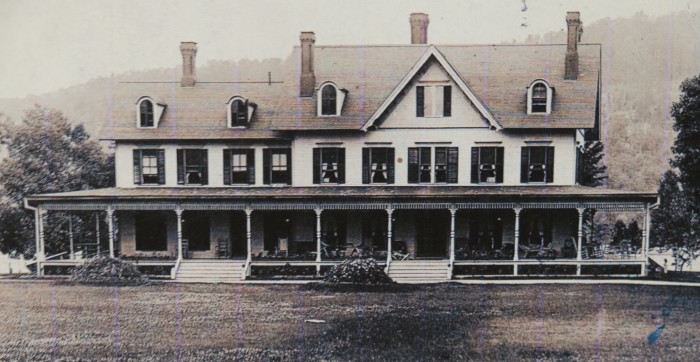 Gone. All that remains of what  came to be known as Barry House is a pile of rocks on a stretch of land between Point O’ Pines Camp and Brant Lake Boys Camp. The rocks cover a patch of wild mint. For many years the mint has flourished, surviving a spring ravaging from a John Deere lawnmower. Will the mint, buried under the rocks, finally be vanquished, this fragrant herb that only needed a crack of breathing room to stand tall and graceful?

Long before the Albany Episcopal diocese acquired the estate, and named the retreat after Bishop Barry, the house had a distinguished history. I am not aware of the owners of the original cottage, a euphemism for a stately mansion, that came into existence near the end of the 19th-century. Early pictures from that era feature a wrap around porch lined with rocking chairs. The porch disappeared many years ago but the house reminds me of Tara from Gone with the Wind and at any moment I envisioned cavalry from the Union Army in tight fitting, Prussian blue uniforms, riding up to the cottage on their way to the front. If not the cavalry, at the very least Elizabeth Taylor! I admit that I am romanticizing and have even stretched the dates a bit but those thoughts symbolize the magnificence of the manor!

Last fall I sat on a back porch buttressed by massive pillars and looked out onto an empty fish pond. Further on, Brant Lake flowed peacefully. The leaves were beginning to fall and, I knew, soon the house would also fall. It was beyond repair. The basement flooded, water covering exposed wires, wood decaying and the interior space could never be adapted to modern times. Only several mahogany doors and a wall of Delft tiles were worth saving. The time had arrived. The end of an era. It was a glorious era and the family that had owned the house for over a century decided that there was no alternative except to demolish the structure.

I returned several weeks ago and snow covered an empty pit. Black metal horse heads, attached to hitching posts, stood forlorn. Today, no one uses these hitching posts but a picture from over a century ago portrayed a farmer in a horse and buggy, making the rounds of the farm. I imagined the farmer tying up his horse, or, perhaps, guests arriving for a formal dinner.

What was my feeling when I looked out on empty space? Was it  deep loss, heightened awareness that something had ended? Forever? To my surprise I was not disheartened. There was pleasure in contemplating the virgin state before man intruded. Instead of lingering on loss I realized a house is only an inanimate object and can be quickly torn down. Yet, what endures? Abstract qualities like love, hope dreams—and memories. Always memories.

These are the gifts we carry within—carefully imprinted on our very being. Indestructible.