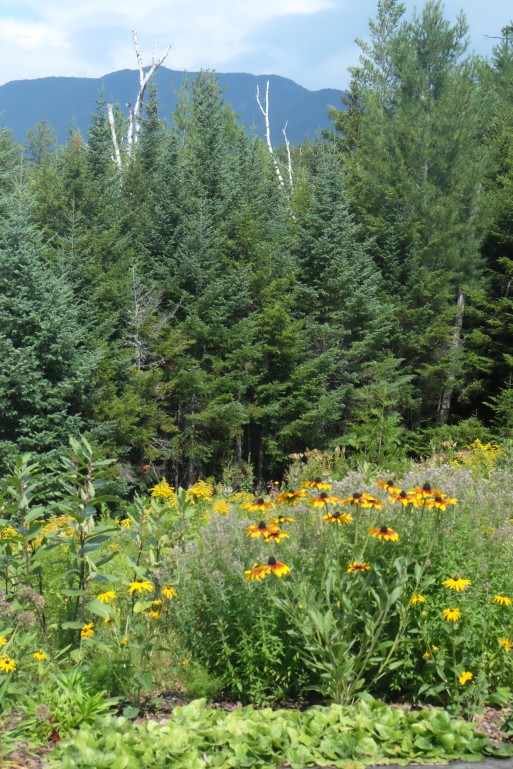 A word about the white pine. This variety of pine served as masts for ships in the British Navy, provided meals high in vitamin C, and the pine rosin waterproofed baskets and boats. If you suffer from tapeworm, mix the pine needles with beer and those little pests will die, although I prefer scotch without pine needles! On a more positive note “Adirondack,” an Iroquois word meaning “tree eater,” refers to the time when the Indians collected the bark to combat winter hunger.

Henry David Thoreau wrote, “There is no finer tree,” and the Iroquois Confederacy claimed the white pine was the Tree of Peace, home to red crossbills and a haven for squirrels. Throughout the Adirondacks, white pine provides lumber for homes, planks for the interior walls of  bars and restaurants and as the primary building material for the Great Camps.

However, I had another reason for setting off early in the morning, shovel over one shoulder, burlap draping my neck. I was going to dig white pine and drag trees of every size and shape back to my house. Some trees I found in the fields, others I stole from unsuspecting landowners and some winked at me from along the road side, “Take me! Take me! ” I became a Johnny Appleseed of pine cones.

Why? Why in the heat of summer, sweat cascading down my face, did I embark on this quest instead of relaxing and gliding off in my red canoe? Why? Because of my neighbor. Bill. Bill’s house was next to mine and we became good friends but I chose to create a wall of trees to provide privacy—although in those early days, when we were building our houses, his family was still quite manageable at only 18 in number! But hadn’t Robert Frost written that good fences make good neighbors? So that was the rationale for my pine planting mission. A row of white pines would make good neighbors!

After intensive research, three aspects of that particular evergreen appealed to me. They lived for 250 years, which would certainly last my lifetime with several hundred years to spare. They grow to 150’ in case Bill envisioned building vertically and, the clincher, the white pine grows quickly. While my several hemlock and Douglas fir doddled along the pine would soar skyward. And they did. In several years I could not see Bill’s house although I could hear the fiddle, guitar, harmonica, drum and trumpet with which this musical family serenaded Brant Lake.

Then it happened. One spring I noticed that I again saw Bill’s house. How was that possible? Quite simple. I had neglected the fact that the lower branches of white pine eventually fall off revealing the world around them. Suddenly I had a forest of white pine tooth picks. Bill’s house was clearly visible between them and, in a breeze, the Douglas and the hemlock, with limbs that descended to the earth, seemed to laugh at me as they blew from side to side.

Perhaps good fences do make good neighbors but maybe life should be lived with an openness to one another. And, although I was impatient to construct my wall of trees, I had learned that speed may facilitate the journey into the heavens but our lives are lived here on earth—plodding along with the fir and the hemlock, yet still beautiful and ever green.